Double sided timing belts, or double sided synchronous belts, are power transmission belts which have teeth on both sides to provide synchronization from both driving surfaces. They are commonly used to rotate axles in opposite directions. Double-sided belts can transmit 100% of their rated load from either side of the belt or in combination from both sides. They are made from rubber with tensile cord reinforcements for improved strength and durability. Double-sided timing belts are available in a variety of configurations depending on the mechanical requirements in both metric and imperial pitches. 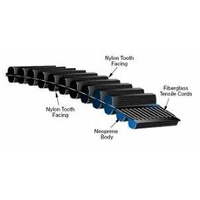