Banded Narrow Section Cogged Belts have two or more cogged belts joined together, side by side, to form a single unit. They have grooves, notches or cogs, perpendicular to their length (circumference) that improve their flexibility. These cogs give the belts increased flexibility so they are able to run on smaller pulleys than wrapped belts, their non-cogged equivalents. Cogged belts may be used in the same v belt pulleys as 'wrapped' belt but are known to be more durable, run cooler, and more efficient than standard vee belts. Banded belts are commonly used in drive systems that have long center distances or prone to vibrations wherein a single belt may jump or slip. Whilst cogged belts have a number of advantages over their wrapped equivalents, they are noisier due to the cogs and, as they are not wrapped, have less protection from dirt and therefore should not be used in particularly greasy environments. 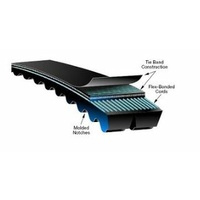