This is an overview of the most observed singular wear patterns on cutting tools. These include flank and crater wear, built up edges, chipping, thermal cracking, plastic deformation, notch wear, chip hammering and edge breakage. (Taken from this post by Seco. Republished with permission. Edited for point of view, recency and relevance.)

For each of these wear patterns, some of the possible counter measures to undertake in order to avoid, or at least minimise, their impact on the machining process are provided. Flank wear is the most desirable wear condition because it is rather predictable and dependable, while offering a well-defined relation between flank wear and achievable tool life. However, flank wear that occurs too rapidly – resembling classic flank wear but develops in a very short time period – can be a problem.

At lower cutting speeds, the main causes of flank wear are abrasion and erosion. Hard microscopic inclusions of carbides or strain hardened workpiece material particles cut into the cutting tool. Small pieces of coating then break off and cut into the tool face. The cobalt eventually wears out of the matrix. This reduces the adhesion of the carbide grains, causing them to break away as well. At higher cutting speeds, diffusion wear is the main cause of flank wear because higher cutting speeds generate higher temperatures on the cutting edge, creating favorable conditions for diffusion to take place.

Flank wear resembles a relatively uniform abrasion along the tool’s cutting edge. Occasionally, metal from the workpiece smears over the cutting edge and can exaggerate the apparent size of the wear scar. Flank wear happens in all materials, and a cutting edge will normally fail due to flank wear if it doesn’t fail by other types of wear first.

Some corrective actions to minimise flank wear are to reduce the cutting speed (in some cases increasing the feed rate can also help), select a more wear resistant, harder carbide grade and to correctly apply coolant. Crater wear is a combination of diffusion and decomposition (higher cutting speeds) and abrasive wear (lower cutting speeds). The heat from the workpiece chips decomposes the tungsten carbide grains in the substrate and carbon leeches into the chips (diffusion), wearing a ‘crater ‘on the rake face of the insert.

The crater will eventually grow large enough to cause the insert flank to chip or may cause rapid flank wear.

Crater wear takes the shape/appearance of a crater or pits on the rake face of inserts. Crater wear will be visible mostly when machining abrasive workpiece materials or materials with a hard surface.

To minimise crater wear, it is best to use coatings containing thick layers of aluminium oxide, apply coolant, use a free cutting geometry that reduces heat and to lower cutting speeds and feeds. Built-up edges (BUE) are caused by adhesion of workpiece material that is pressure welded to the cutting edge. This occurs when there is chemical affinity, high pressure and sufficient temperature in the cutting zone. Eventually, the built-up edge breaks off and takes pieces of the cutting edge with it, leading to chipping and rapid flank wear.

Built-up edges look like shiny material parts on the top or flank of the cutting edge and lead to small pits or craters on the rake face of the tool and ultimately to cutting edge chipping. Built-up edges typically occur in gummy materials such as non-ferrous materials, super-alloys and stainless steels and during operations involving slower cutting speeds and feeds.

To prevent built-up edge wear, increase the cutting speed and or feed rate, select an insert with a sharper geometry and a smoother rake face and correctly apply coolant at an increased concentration. 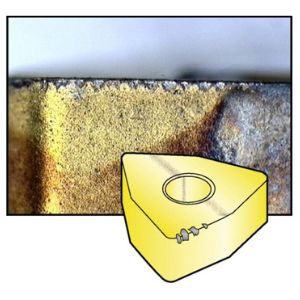 Chipping is caused by mechanical instability or cracks in the cutting material. Chipping of the cutting edge is often a result of vibrations in the workpiece or machine tool or the tool itself.

Hard inclusions in the surface of the workpiece material and interrupted cuts result in concentrations of localised stress that can cause cracks and chipping. Stress cracks form along the cutting edge, eventually causing sections of carbide to pull out and the edge to chip. Thermal cracks can be observed mostly in milling and interrupted cut turning, and intermittent coolant flow can also lead to thermal cracks.

Some corrective actions are to apply coolant correctly, select a tougher carbide grade, reduce the cutting speed and the feed, use a free cutting geometry that reduces heat and to consider a different machining method (ratio time in cut/time out of cut). Thermal overloading is the main cause of plastic deformation. Excessive heat causes the carbide binder (cobalt) to soften. Then, due to mechanical overloading, pressure on the cutting edge makes it deform or sag at its tip, eventually breaking off or leading to rapid flank wear.

Expect plastic deformation when cutting temperatures are high (high cutting speeds and feeds) and when the workpiece material is high strength in nature (hard steels or strain hardened surfaces and superalloys).

Some corrective actions are properly applied coolant, reduced cutting speeds and feeds, using an insert with a larger nose radius and opting for a harder, more wear resistant carbide grade. Notch wear happens when the surface of a workpiece is harder or more abrasive than its underlying material. This can be due to surface hardening during previous cuts (strain hardening materials like stainless steels and super-alloys) or originate from forged or cast surfaces with a surface scale, all of which causes the cutting edge to wear more rapidly at the point where the cutting edge contacts the hard layer.

This localised concentrated stress can also lead to notch wear. What happens is that compressive stress develops along the cutting edge that’s in contact with workpiece material, while it doesn’t occur where the cutting edge is not in contact.

This causes high stress on the cutting edge at the point where the two are in direct contact (depth of cut line).

Impact of any sort, such as hard micro inclusions in the workpiece material or slight interruptions can also cause notch wear.

Some corrective actions include reducing feed rate and varying the depth of cut when using multiple passes, increasing cutting speeds if machining a high temp alloy (this will give more flank wear), selecting a tougher carbide grade and using a chip breaking geometry for high feeds needed to prevent built-up edges, especially in stainless and heat resistant alloys. The risk that this happens is greater with operations involving high feeds and deep depths of cut combinations.

To correct for chip hammering, change the feed rate and the cutting depth, select a different cutting edge angle, use a different chip breaking geometry and go with a tougher carbide grade. 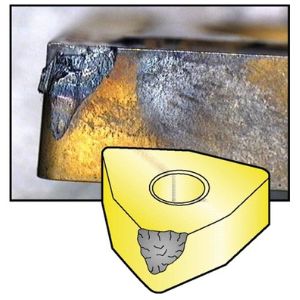 Any overview of basic wear patterns must also include cutting edge breakage. Catastrophic breakage of the cutting edge is not a wear pattern, but an unwanted and dangerous phenomenon caused by using tools incorrectly.

Start with lower values for the cutting conditions (mainly depth of cut and feed) or choose a stronger cutting edge (tougher carbide grade or stronger geometry). It could also be that one of the previous mentioned wear patterns expanded and weakened the cutting edge so much that it could no longer withstand the loads acting upon it. In these instances, changing to a new cutting edge earlier will prevent breakage.

Wear descriptions concentrate on the visual aspect of tool wear. In addition to them, there are other phenomena that can be observed when the cutting edge is wearing.

These can indicate that the tool is wearing out and is perhaps ready to be replaced.

Tool deterioration is the process by which the condition of a cutting tool becomes increasingly worse and gradually causes the tool to lose its ability to perform in line with expectations.

Tool deterioration comes as aging-wear, sudden impact phenomena like breakage and as chemical interactions between workpiece material and cutting material.

Aging-wear is a process of progressive surface damage leading to removal of material from one or both of two solid surfaces in solid state contact, occurring when these two solid surfaces are in sliding or rolling motion contact in environmental conditions of pressure and temperature.

This overview of basic, singular wear patterns gives basic remedies to take care of tool wear that is for the machinist unacceptable in form or in pace of development.

Clamping Made Easier and Faster with Lockjaw

Here’s why the updated Lockjaw automatic pliers and clamps are much easier to use.

There are many factors determining the choice between high-speed steel (HSS) and carbide cutting tools. Sutton Tools discusses the various pros and cons of each.