Coupling Elements are flexible elastomeric inserts, also known as spiders due to their shape, placed between the two halves of a Jaw or HRC coupling. Coupling elements dictate the torque rating of the coupling, as well as the coupling's response to vibrations, temperature, chemicals, and speed. Commonly used element materials include Nitrile Butadiene Rubber (NBR) and Urethane. NBR based elements provide the best damping capability and can withstand an operating temperature up to around 115 degrees C. Urethane based elements have less damping capability but with a higher torque capacity and are suitable for operating tempatures up to around 110 degrees C. 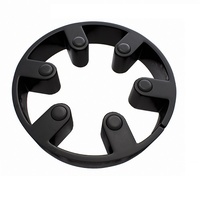